With a decrease of 10 and 17 per cent respectively in the number of exhibitors and visitors, the escalation of Iraqi conflict and the global economical deceleration definitely took their toll at CeBIT 2003, an international gauge for ICT industrys vitality. The buzzword convergence, embedded in the broadband environment, applied to every area of the exhibition, from network technology and software solutions to a broad array of new terminal devices.

Its not the number of visitors but the quality of contacts that counts. Quality over quantity is the hallmark of CeBIT 2003, declared the Berlin-based German Association for Information Technology, Telecommunications and New Media (BITKOM) in its end-of-show statement.

Despite the general decrease of both visitors and exhibitors, Deutsche Messe AG, the organiser of CeBIT reported an increase increase in attendance from Eastern Europe, both in relative and absolute terms. Around 18,500 visitors (16,100) or 15.3 percent (11.7 per cent last year) of all foreign visitors travelled to Hannover from this region.

In terms of future trends, platform integration and data access through broadband concept (LANs, WANs, WLANs) seem to be the throttle to further developments in the ICT industry as well as new processes of digital authentication through the internet:

The telecommunications industry is developing some attractive new markets for business clients and consumers by bundling diverse infrastructure technologies with new services.

The buzzword convergence is not restricted to merely combining telephone with data services; it applies at all levels  from network technology and software solutions to a multitude of terminal devices.

According to network providers, data services now make up 15 to 20 percent of total turnover, and the trend is rising. Further growth factors include video messaging and video telephone services, plus the announcement of significant cost reductions for data packet transmission. This will inspire a growing number of consumers to make use of the numerous infotainment options offered by network providers.

Parallel to the introduction of UMTS, several large telecommunications suppliers have also announced plans to install Wireless Local Area Networks (WLAN) at access points (hotspots) like hotels, airports or railway stations, where business customers and consumers can access the intranet and internet.

To avoid expensive multiple installations, providers are considering WLAN roaming as an option. Fees for WLAN usage would then automatically show up on cell phone invoices.

The advent of Digital Video Broadcast Terrestrial television (DVB-T) is also upon us. DVB-T will provide mobile users with access to broadband content as an ideal complement to GSM and UMTS mobile transmission services, helping interactive entertainment become commonplace on tomorrows mobile devices.

Compared with network technologys leaps and bounds in the not-so-distant past, the sector has made only modest advances over the past year. Suppliers are working with customers to create strategies for network optimisation.

New, more powerful technology is being deployed in especially high-traffic areas as a way of increasing overall network performance. 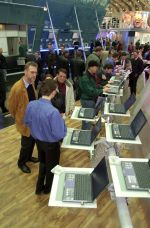 The new devices feature wireless access via GPRS, Bluetooth or WLAN, and are also conversant with the internet. All new smart phones already come with a built-in digital camera for mobile snapshots. Many devices use well-established operating systems like Symbian, Palm OS, Microsoft Pocket PC or Linux.

In the classic PC arena, the trend is no longer just towards ever-higher clock rates, but also towards optimised system performance. New, multi-channel architecture is helping to increase memory bus speeds.

Even in the lower-priced segment, a growing number of components are now connected directly to the chipset, eliminating the need for shared use of the system bus. At the end of the year, the first 64-bit processors for the private consumer segment are scheduled for launching.

The boundary between consumer electronics and information technology is also disappearing. Thanks to a price drop, TFT-LCD monitors are now becoming standard PC equipment. Even the multipurpose, windscreens LCD monitors with diagonals of 21′ or bigger are coming down in price.

Numerous software companies are increasingly focusing on small and medium-sized enterprises (SMEs), appealing to them with special offers and targeted products, as well as comprehensive support and tailor-made financing options.

Standards like XML (Extended Markup Language) and web services continue to make inroads in the area of data integration. Tools that evaluate the interaction between user and application program are becoming more popular, allowing for automatic adaptation of user profiles to match a users individual needs or habits.

Companies are also increasingly interested in open source solutions, with their reputation of being cheap and stable, as an alternative to other systems.

Efficient software solutions are increasingly being used for applications involving personnel recruitment and deployment. Here, the focus is on holistic concepts that support networking with other applications, such as knowledge, project and process management along with access control and security systems.

Rugged terminal devices that can take lots of mechanical and thermal punishment and use GPRS, WLAN or Bluetooth communication protocols are making inroads in the field of mobile data capture. In voice and image processing, the focus is on increased flexibility and reliability.

Multi-channel banking refers to the provision of banking services via several channels. Here the focus is on flexible, scalable software. Increased electronic and mobile access has made reliable customer authentication more important than ever.

In the future, credit cards will support enhanced security standards and offer additional, integrated services that go beyond mere payment transactions. Another key topic: software-assisted analysis of market and credit risks within the framework of the Basel II owners equity guidelines.

Security providers are using biometric procedures such as fingerprint recognition together with, for example, smart cards, to authenticate card or ID holders.

E-government requires digital signatures on documents in place of real ones. Data encryption and secure transmission procedures on the internet are prerequisites for legally secure electronic contracts and the successful introduction of personal ID and health-care cards. In like manner, the public sector is making increasing use of the internet for procuring goods and services.

Next years CeBIT show will be staged over seven days from Thursday, 18 to Wednesday, 24 March 2004.